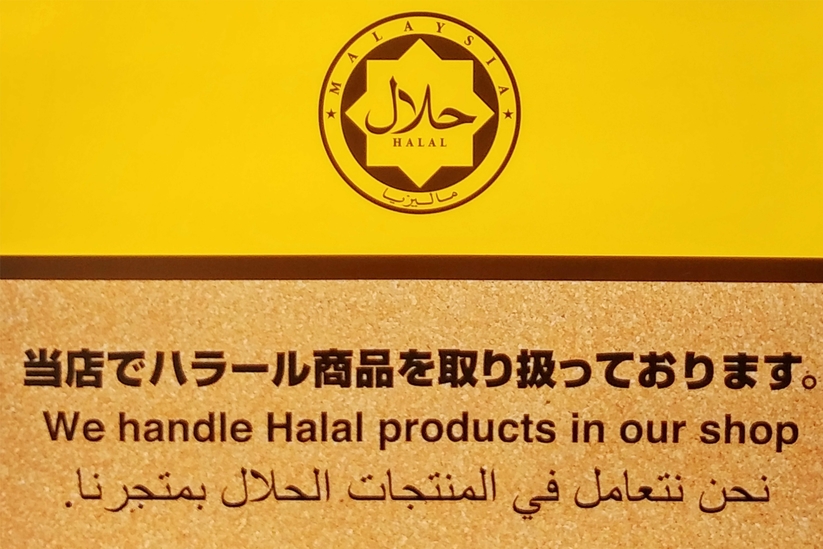 Hi all, the food scientist wannabe or those who seek science from your slice of meal. This time, i’d like to share my opinion regarding halal foods in Japan as i’ve just came back from Japan months ago. Well, this post shouldn’t be your only reference about halal food in Japan cuz there’s a lot of information you can gather from any source. This tips are good to read by those who wants to live in Japan as a moslem, or simply bring back souvenirs to your own country.

2 . Everyone might has different perspective and standard of halal when living in Japan, so PLEASE DO PAY RESPECT to anyone’s belief.

3 . This post is made by personal experience or refer to someone’s quote. Objections are welcomed in the comment section below.

4. We put the “Safe” label for food which hasn’t obtained the halal certification. Yet, those food is labelled as “Safe” since there’s no ambiguous or doubtful ingredients written in the label/package.

Halal is the thing of which every moslem pays attention to. First thing first to be simplified, halal means something that is allowed to be consumed by moslem, haram is something that is forbidden, and subhat is something unclear and better be avoided. Details regarding halal and haram term are stated either in the Holy Quran or Hadits. One of the verse that states the don’ts is Al-Maidah : 3, which is described as following.

Prohibited to you are dead animals, blood, the flesh of swine, and that which has been dedicated other than Allah, and [those animals] killed by strangling or by violent blow, or by a head-long fall or by the goring of horns, and those from which a wild animal has eaten, except what you [are able to] slaughter [before its death], and those which are sacrificed on stone altars, and [prohibited is] that you seek decision through divining arrows. That is grave disobedience. This day those who disbelieve have despaired of [defeating] your religion; so fear them not but fear Me. This day I have perfected for you your religion and completed My favor upon you and have approved for you Islam as religion. But whoever is forced by severe hunger with no inclination to sin – then indeed, Allah is Forgiving and Merciful.

As for my experience in Tsukuba, Japan, some of the moslem’s degree of acceptance regarding halal food may changes from their country of origin. Herewith, i write some of the conditions which i found during my study.

1. Consume the HALAL CERTIFIED PRODUCTS only.

2. Still tolerate products which haven’t been certified yet. But still, the ingredients and the making process itself doesn’t contain anything suspicious of which may taints the halal concept. For short, he/she only consumes the “Safe” list. Ex: Eating snacks which have no animal-based ingredients, alcohol free too.

3. As long as not staying for a long time (e.g. short trip, vacation, etc), they still eat something which should be OK ingredient-wise, yet ignoring the rest of the process. Ex: Eating beef in a condition where you can’t eat anything but beef and pork in that remote area.

4. Eat anything except pork

Well, glad to hear that the Government of Japan is now doing their best to provide a moslem-friendly services throughout the land of sunrise. Mosques, halal restaurants and hotels, also moslem-friendly tourism spots are now getting abundant along with the increasing number of moslem people in Japan, either worker, student, or tourist. And… lucky that Tsukuba city is an all-in city (as for me) since there are some halal restaurants around the city, supermarkets which sell halal products, imported from countries like Turkey, Malaysia, Indonesia, Thailand, and Vietnam, and also mosque which have just been renovated since the end of 2018.

Aside from the facts that there’s a lot of halal shops and restaurants around the city, University of Tsukuba also provide that kind of amenities, from the praying room in Global Village dormitory area, halal cafe in 2B and 3A building, and Kasumi Supermarket x University of Tsukuba. At the first glance, the halal products might be a little bit more expensive than the rest, but in fact, they are not always like that! Halal meat and chicken are slightly cheaper than the non-halal ones.

Then… my friend Takuya, happened to have an idea of making halal database throughout Tsukuba (nice idea bud!), named Salam Tsukuba. Well, the program itself didn’t run smoothly cuz he’s gone to The Philippines to conduct his research and stuffs. But at least, it created a small awareness among Japanese students. The awareness regarding halal is also amplified by some international bonding organization and event, namely CASA and Campur. From those, i’m sure that the Japanese students as well as the other international students can mingle with moslems and any other religion believers to build a better understanding among them. It’s great to have an experience in the one top 10 universities in Japan which gives a really good international exposure to me.

IDK who propose the name “campur” cuz it means mix in Bahasa Indonesia, but another Japanese friend said that it’s Okinawan local cuisine.. But hey it looks interesting, cool name tho!

Okayy, so what are the things needed to be concerned? Here are my opinions.

1 . 豚  = Buta/Ton, means Pork. Whatever the form is, pork is always a big fat NO NO for me. So, i would never eat something that contains 豚肉 = Butaniku (pork meat),  豚エクス = Buta Ekusu (pork extract) and such stuffs. I also put an extra NO NO awareness toward トンカツ (Tonkatsu = Pork cutlet) and 豚汁 (Tonjiru = pork soup) when it comes to eating out cuz sometimes the restaurants include that on the set menu (定食). This one is the easiest one to avoid among all.

2. アルコール = Aruko-ru, means Alcohol. Anotherbig fat NO NO for such things like お酒 Osake, (Sake), ビール Bi-ru (Beer),  ワイン Wain (Wine), and any other liquors. I also needed to check if there’s 味醂/みりん Mirin (Mirin, rice wine) or something like that within the ingredients used for making food. Be careful with the so called clear water in a bottle sold in supermarkets cuz it might be alcoholic liquid, not a normal drinking water.

Another things which still in the dark grey zone, but i personally avoided these stuffs when i was in Japan:

1 . 動物油脂 = Dōbutsu Yushi, or animal fat. Since they almost never stated where does the fat comes from (cow or pig, who knows?). Oh, グリセリン= guriserin or glycerin is doubtful as well. So, take note to avoid those one and it’s a piece of cake, trust me 😀

2 . ショートニング = Shortening. Unless stated from plant-based (植物 – shokubutsu), better avoid this one than sorry. As for butter and margarine, as long as they’re made of milk and vegetable oil (soy, palm, coconut, etc), they might be just OK.

3 . ゼラチン = Zerachin, or Gelatin. Gelatin source may varies from cow to pig. But since the easiest and cheapest source is from swine, then we should be careful. Simply avoid any products with gelatin. Gummy? ughh, Nope!

4 . 乳化剤 = Nyūkazai, or emulsifier. Some of food products clearly stated that they use the plant-based emulsifier, usually from soybeans (大豆由来 daizuyurai, means from soybeans). Some, may not specified the source so… just dig in to the clear ones.

5 . 肉(鶏,牛) = Niku, means meat, either chicken (the left one) atau beef (the right one). Waitttt…. why meat is included in the grey zone? Isn’t it supposed to be OK as long as it’s not pork? NOPE!. Well, it should be just fine if i buy the halal one from the shops, but the non-halal ones? I prefer not to buy or consume those. Thanks 🙂

“What about the others? Anything suspicious?”

As for flour, sugar, coloring, flavoring, and sweetener, i personally considered as “Safe” since there’s no report yet regarding that issue. As for amino acids, they’re considered as the grey-est ingredients for me since they’re easily found in many sources, both animal and plant. Well, cystein might be may present in hair of which might be pig hair, but how about lysine? Soy and egg have sizeable amount of that. The safest way to obtain such information is asking right to the makers themselves, either by phone for mass commercialized products or directly talk to the restaurant staff. Asking the makers also provide us the latest product condition since some companies might change their ingredients according to the season.

Lastly, i feel lucky to have PPI Ibaraki (Persatuan Pelajar Indonesia, or Indonesia Student Association of Ibaraki) in Tsukuba-dai. I could ask for informations and the know-how to struggle for survival in Japan. Moreover, there is also website that provide further informations regarding moslem lilfe in Japan and beyond (check dis out: https://fooddiversity.today/en).

Conclusion: Living in Japan might be hard for the first-timer but hey, only counts for days. There’s a lot of halal food source as well as the information itself, so no need to worry about it.